all rooms are disinfected and cleaned according to the guidelines of Ordinance No. 65 of 10/06/2020 of the Tuscany Region and are further sanitized with Ozone for your and our safety

Our apartments and double rooms 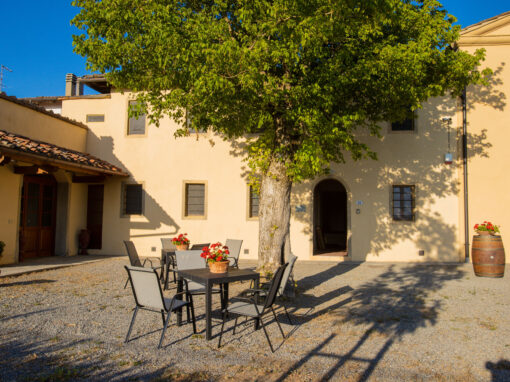 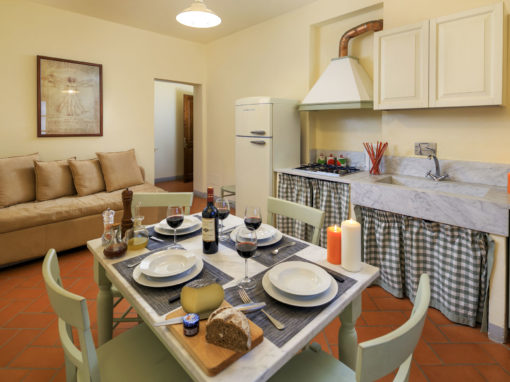 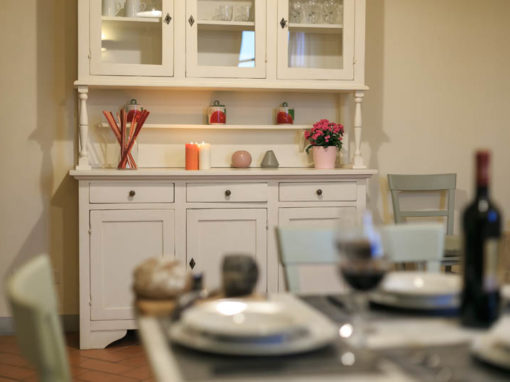 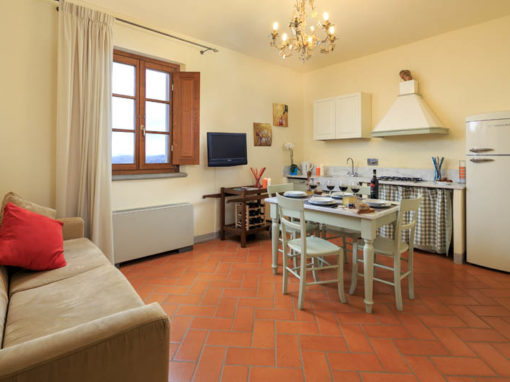 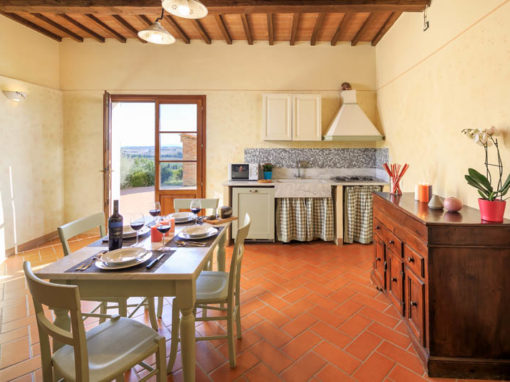 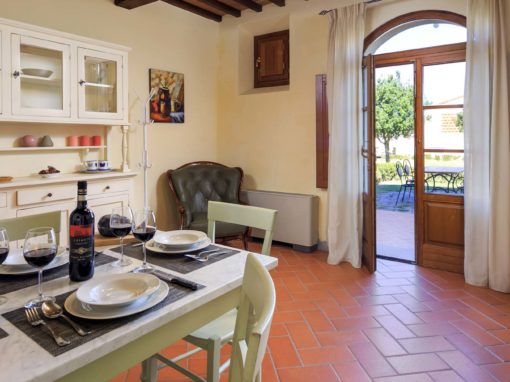 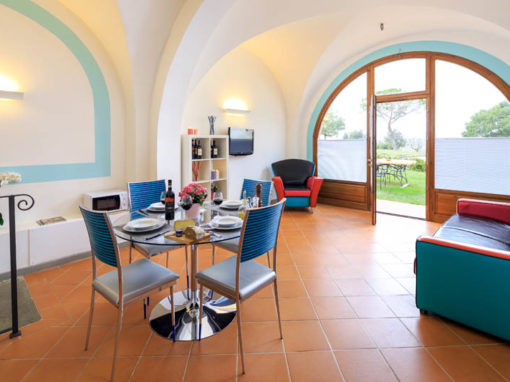 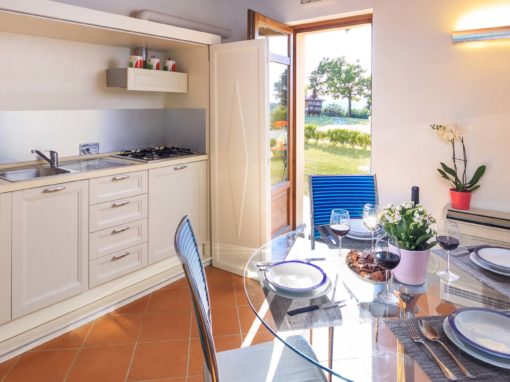 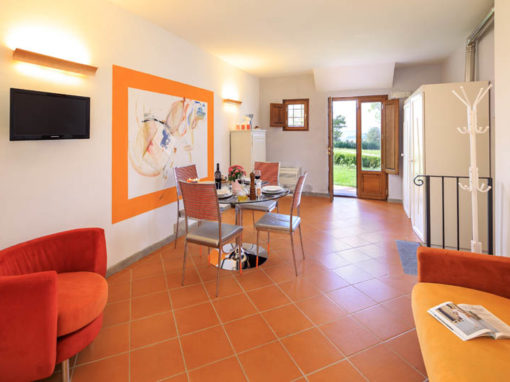 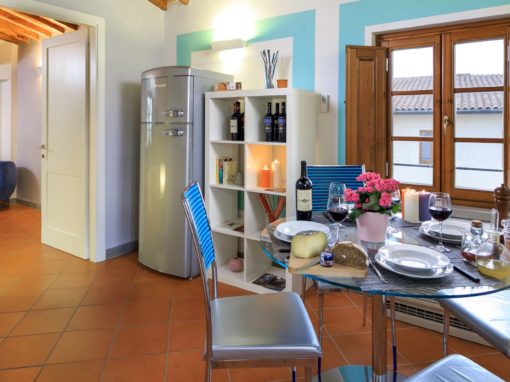 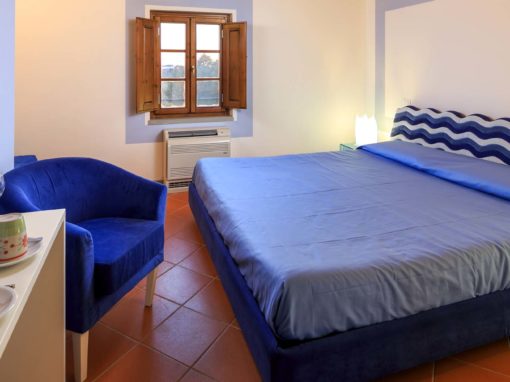 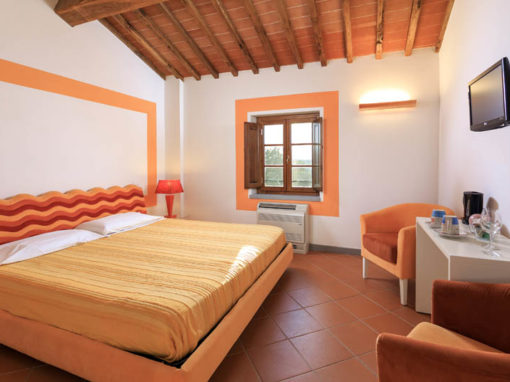 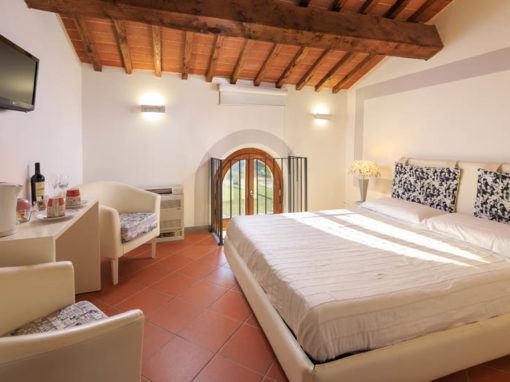 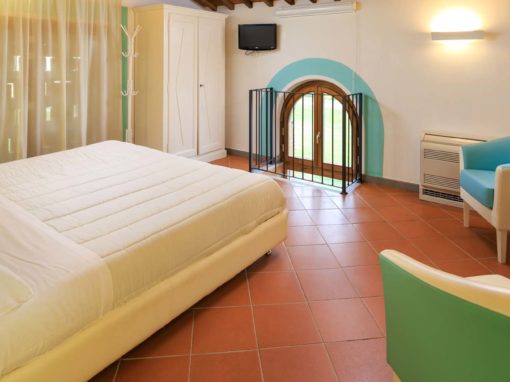 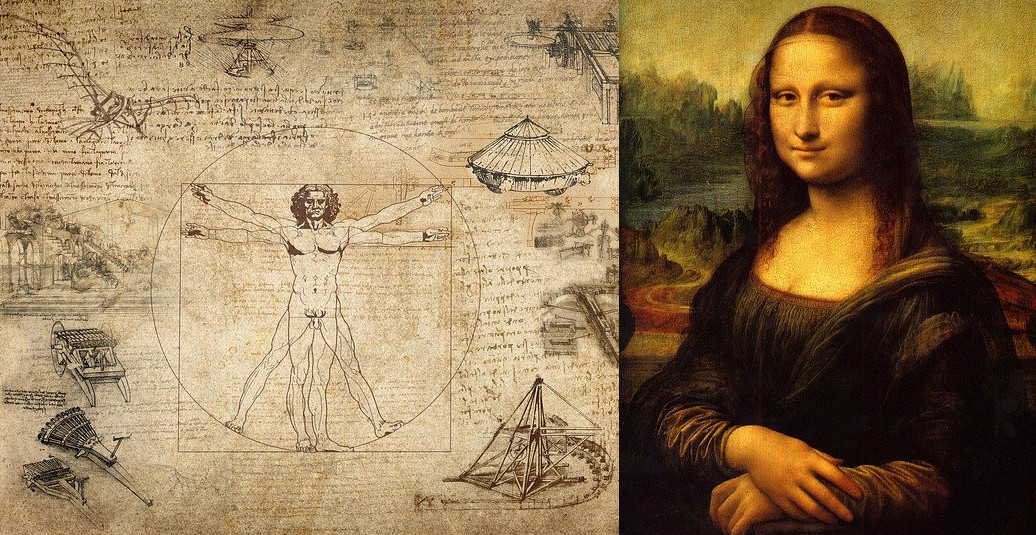 Streda Belvedere is located a few minutes from Vinci, the birthplace of Leonardo Da Vinci, a man of talent and universal talent of the Renaissance. The city of Vinci is little more than a village developed around the medieval castle of the Counts Guidi and dominated by the tower which constitutes a characterizing element in the hilly landscape. The central core of the fortress, restored in 1940, has housed the rooms of the Leonardian Museum since 1953 which, rearranged in 1986 and 2004, displays a large collection of machine models based on Leonardo’s drawings and sketches. It also preserves a glazed terracotta from the Bottega di Giovanni della Robbia. It is closely connected with the Palazzina Uzielli and with the Leonardian Library, which constitutes an important documentation center for studies on Leonardo. Since 1993, the Ideal Leonardo Da Vinci Museum has been open to the public in the evocative spaces of the underground gallery and in the ancient cellars of the Castello di Vinci.

It is the first museum in the world that deals with the complexity of Leonardo artist, scientist, inventor and designerin relation to his biography, its territories and its relevance, with ancient originals (paintings from Leonardo’s workshop, engravings and finds). Over sixty models recently artfully reconstructed from Leonardo’s projects (some functional, others workable) and wonders of Leonardism (from vintage memorabilia to works by modern artists including Duchamp) …

Visitors to the Ideal Museum will be able to access (from via Collinare to the gates of Vinci) the nascent “Leonardo’s Garden” and enter the “Labirinto dei Vinci”, (1,500 trees and a path of 740 meters) as well as walk the “infinite knot” and the “Path of different trees and flowers”. the garden of the senses, secrets, cosmologies and discovery, as an open-air section of the Ideal Museum and theme park.

Within the castle walls there is the Church of Santa Croce, of medieval origin but restored in the neo-Renaissance style in the first half of the twentieth century, where Leonardo was baptized in April 1452. It contains the “Baptismal Font” recomposed in 1952, the fifth centenary of the artist-scientist’s birth, and some paintings from the 18th and 17th centuries. At the end of the present Via Giovanni XXIII stands the 17th century Sanctuary of SS. Annunziata, with a large altarpiece attributed to Fra ‘Paolino da Pistoia: an “Annunciation” from the early 16th century. On the suggestive hills of Anchiano, two kilometers from Vinci, there is a rural construction (restored in 1952 and 1986) which a tradition identifies with Leonardo’s birthplace. A few kilometers from Vinci, in Sant’Ansano, there is the three-nave Romanesque church of S. Giovanni Battista in Greti, which still preserves the carved medieval capitals and a masterpiece by Rutilio Manetti, one of the masters of Sienese painting of the seventeenth century. Vinci is the ideal place to discover Leonardo’s works, art and spirit, and has become a real point of reference for all fans of the Renaissance genius. 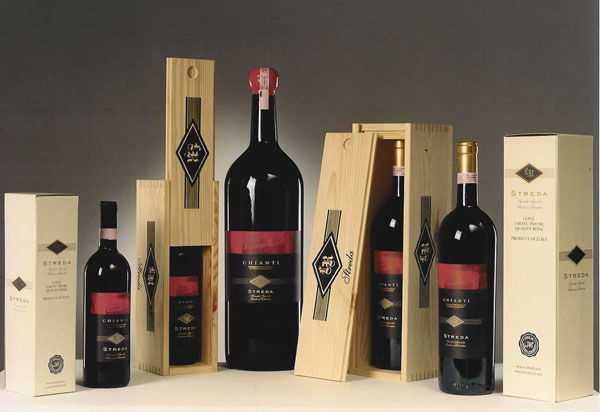 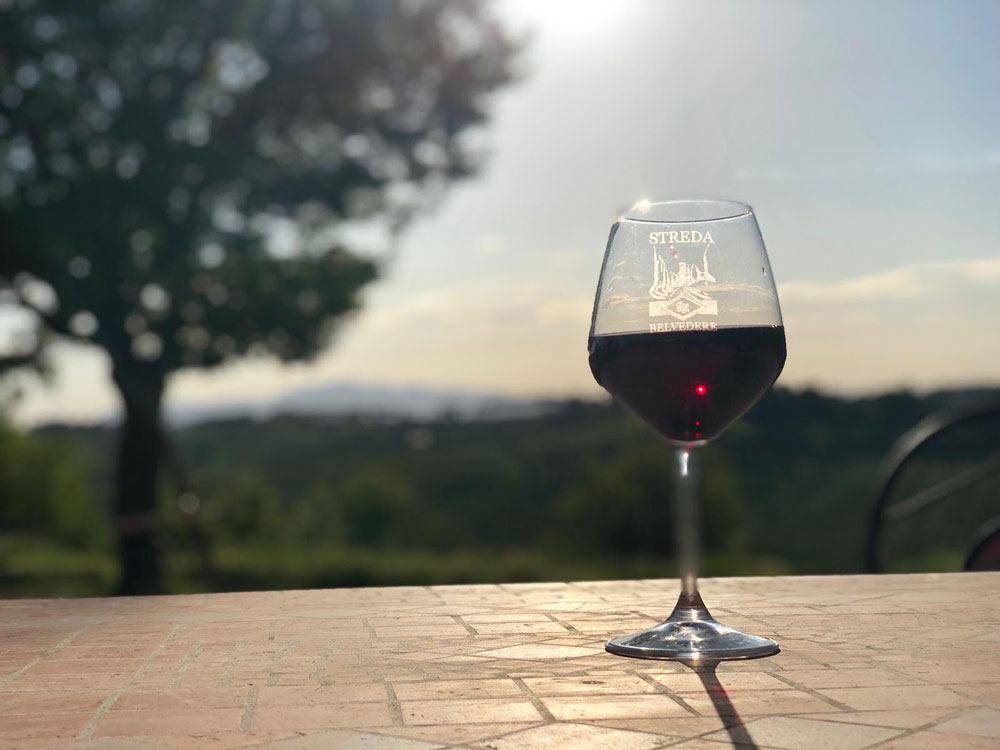 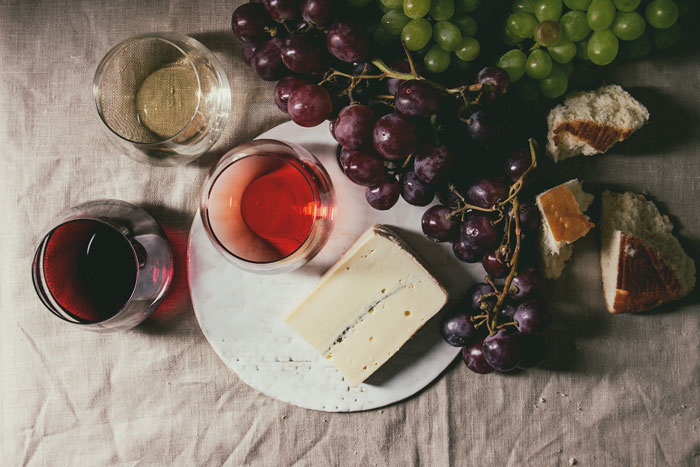 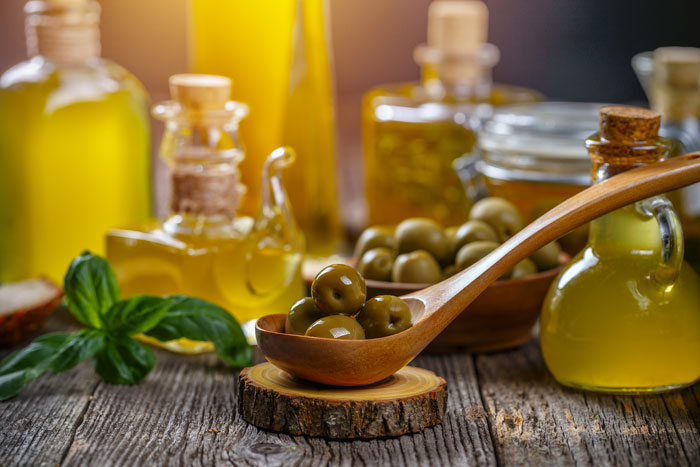 We directly produce quality wine and oil that you can certainly taste and appreciate during your stay.
The restaurant houses an area dedicated to tasting our wines accompanied by local specialties. It is possible to organize dinners for groups with tastings of the wines we produce on request.

Click to deepen the knowledge of our wines before tasting them 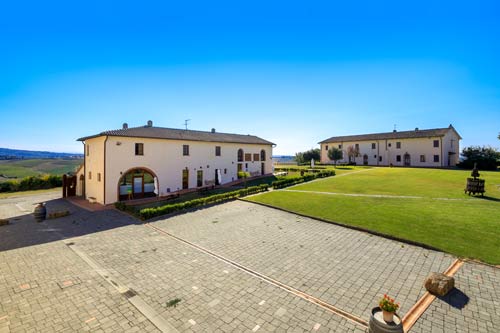 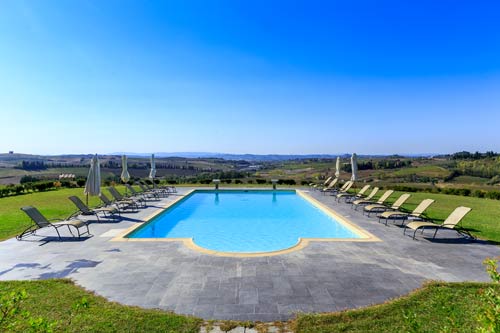 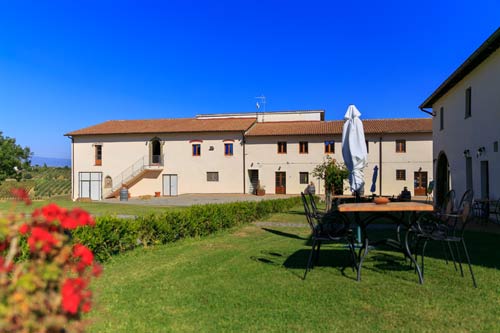 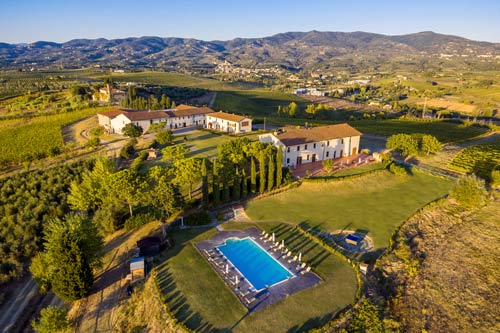 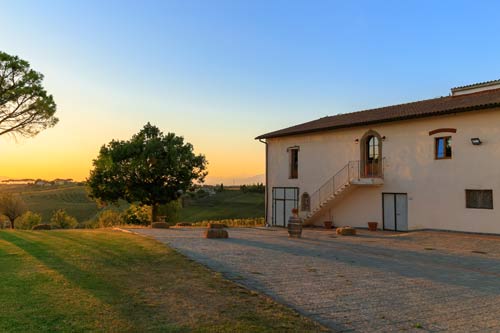 Located in the splendid setting of Montalbano in Vinci, in the heart of Tuscany, the birthplace of the famous genius and master Leonardo da Vinci, Agriturismo Streda is composed of three historic farmhouses on a property of about 80 hectares. The position between vineyards and olive groves offers an exclusive and relaxing view in the magical framework of beauty and tranquility of the Tuscan countryside. You will be able to visit the most beautiful Tuscan cities easily reachable in a short time such as Florence, Pisa, Lucca, San Gimignano, Siena, which are one step away from here. A beautiful panoramic swimming pool and an outdoor Jacuzzi are available to guests. 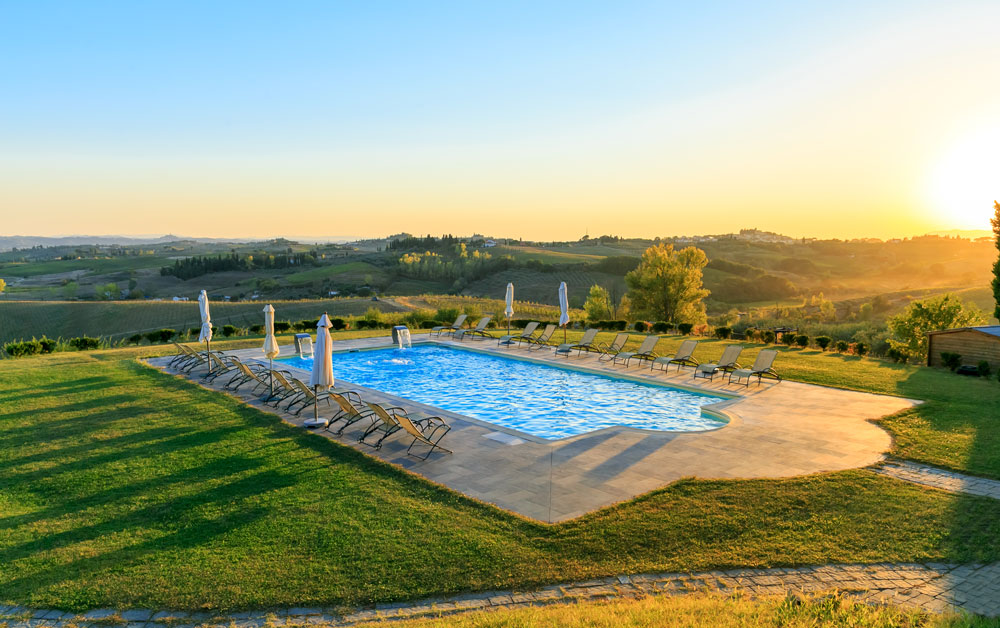 Our apartments are equipped with

If you have specific or particular needs, you have only to ask, we will be happy to satisfy your requests

I just returned from Streda where I spent 4 days on the occasion of my partner’s birthday. Mr. Claudio welcomed us, who had reserved the green room I had chosen (beautiful). Kindness and confidentiality in a brand new and very well kept place: everything is perfectly cared for, quiet and in an excellent position to reach the nearest cities of Tuscany.
The only small flaw would be a room for serving breakfasts, there is a small room to be able to make coffee with waffles but in such a place it would be great to be able to have breakfast at your table outside the rooms in that splendid setting.

We came here for the strategic position, we wanted to visit Pisa, Lucca, Livorno, Montecatini, the choice was never more apt. As soon as we arrived the owner welcomed us with a good glass of wine, the apartments have been recently renovated and are more than comfortable, equipped with kitchen, nice bathroom and breathtaking view! There is a laundry room (with dryer) and one with a coffee machine common to the accommodation, swimming pool, and a playground for the little ones. Finally the great price! What to say… To come back!

We were guests of Claudio for a long weekend, the place is magical, the panorama is exceptional, not only is the location strategic just two km from the FI-PI-LI highway, you can reach every place in no time. Kindness and hospitality are exemplary and noteworthy. The apartments are very hospitable and the rooms are in typical Tuscan style with a hint of modernity in the flat screen wifi services are the setting for a splendid setting. Last but not least the swimming pool and whirlpool with an extraordinary view of an endless and incredibly beautiful vineyard. Claudio is a helpful person, very attentive to the needs of his guests. Before leaving we were kidnapped from his cellar by his wines and his oil, how to bring home a reminder of everything ..

Excellent place to stay in Tuscany

Great place with a postcard view all around. The apartment we stayed in was spacious, clean, equipped with everything we needed. The location is great for getting around Tuscany. There is a train station nearby (Empoli), so you can take the train to Florence and other places of interest.

The ideal place for your wedding